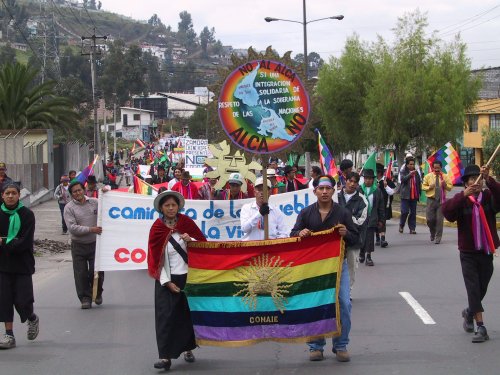 Members of the Confederation of Indigenous Nationalities of Ecuador (CONAIE) march in Quito, Ecuador against the 2002 summit of the Free Trade Area of the Americas (FTAA/ALCA). Donovan & Scott

On March 22, World Water Day, the Confederation of Indigenous Nationalities of Ecuador (CONAIE) arrived in the city of Quito, concluding their 14-day national protest march. Hundreds of indigenous Ecuadorians from the Amazonian and Andean regions came wearing traditional regalia to protest the same government they once helped bring to office. CONAIE hopes their protest will mobilize indigenous communities against new mining developments and a proposed law that would sell international corporations the rights to local water resources.

Ecuadorian communities learned from the way that Chevron’s operations flouted environmental law in the 1990’s, that once entrusted to foreign businesses their natural resources are usually squandered. In instances where Ecuadorian courts have sought reparations for those losses, such as with the monumental lawsuit against Chevron, Ecuadorian lawmakers have folded under pressure from international bodies influenced by the offending syndicates.

The march into Quito is just one act in a growing grassroots movement among indigenous peoples seeking political recognition and protection. According to the United Nations, indigenous peoples own 11% of the world’s forests, including many biodiversity hotspots. So far they have been losing the fight.

Ecuador was the first nation in the world to add legally defendable Rights of Nature to its constitution. But Ecuadorian politicians have not lived up to that amendment. Foreign companies have proven they can’t be trusted to safeguard land and water belonging to Ecuador’s indigenous groups. Hopefully, the government will heed these peaceful protests and allow the indigenous to retain full control of their resources; if not these peoples may turn to less peaceful methods because they will have nothing left to lose.

According to indigenous leaders, the timing is connected to a mining contract signed earlier this month with the Chinese-owned company Ecuacorriente. Ecuador’s President, Rafael Correa, claims that CONAIE seeks to destabilize the government.

These controversial marches ended just weeks after the decision by Ecuador’s Judicial Council to dismiss both of the judges that proceeded over an environmental lawsuit against Chevron Corp. Indigenous plaintiffs from Ecuador’s northern jungle region had sued Chevron for polluting their water and land, desecrating the health of local populations. The judges rendered a verdict of over $18 billion in favor of the plaintiffs.

However, the UN court in The Hague forbid Ecuador from assessing the penalties against Chevron. The UN justified its decision by saying the Ecuadorian government did not guarantee an impartial trial, and thus violated the U.S.-Ecuador Bilateral Investment Treaty (BIT). While the judges were dismissed on charges unrelated to the lawsuit, their dismissal further discredited that monumental verdict.

The complete negation of the ruling against Chevron in Ecuador goes against recommendations by UN experts released on March 19, advising the incorporation of human rights “norms and standards” into the goals for the UN’s upcoming sustainable development forum in June.

There has recently been a growing global awareness that human rights and environmental protection are inseparably intertwined. At the United Nations Conference on the Human Environment, Principle 1 of the Final Declaration states: “Man has the fundamental right to freedom, equality and adequate conditions of life in an environment of a quality that permits a life of dignity and well-being, and he bears a solemn responsibility to protect and improve the environment for present and future generations.”

Furthermore, Article 8 of the Universal Declaration states that: “Everyone has the right to an effective remedy by competent national tribunals for acts violating the fundamental rights.”

Courts in the United States rejected the Chevron case, claiming that Ecuador was the appropriate location for such a trial. The UN then negated Ecuador’s verdict without offering a solution for a retrial, thus further violating the rights of peoples already victimized.

The Ecuadorian activists that marched into Quito must hope their appeal to local indigenous allies will be enough to counteract the lack of support from both the national and international courts. The privatization of Ecuador’s water resources could spell disaster for its people and legendary biodiversity. And despite all its rhetoric, the international legal system has proved it values corporate interests over the life and dignity of Ecuador’s indigenous peoples.