It’s more than a free trade agreement. But what exactly have Australia and Indonesia signed? 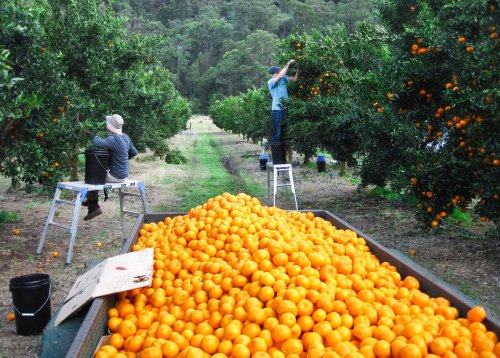 It’s more than a free trade agreement. But what exactly have Australia and Indonesia signed?

Australia’s trade minister Simon Birmingham and his Indonesian counterpart Enggartiasto Lukita signed the Indonesia-Australia Comprehensive Economic Partnership Agreement on Monday. Only afterwards (as is often the case) did we get to see what was in it.

We might never see an independent assessment of its costs and benefits.

Beforehand the Department of Foreign Affairs and Trade released a summary of the good news about increased Australian agricultural and education exports, together with statements of support from export industry representatives.

But most deals have winners and losers. The devil is in the detailed text, released only after the ceremony.

First, what’s missing. There are no chapters committing both governments to implement basic labour rights and environmental standards as defined in the United Nations agreements, and to prevent them from seeking trade advantages by reducing these rights and standards.

Such chapters are increasingly included in trade deals like the Comprehensive Progressive Trans-Pacific Partnership (TPP-11) encompassing nations including Brunei, Malaysia, Mexico, Peru and Vietnam, and the Australia-EU Free Trade Agreement at present under negotiation.

They acknowledge that trade agreements increase competitive pressures, and are intended to prevent a race to the bottom on labour rights and environmental standards.

The fact they are missing from the Indonesia-Australia agreement shows neither government sees them as a priority.

The deal does include something else contentious that was included in the Trans-Trans-Pacific Partnership; so-called investor-state dispute settlement clauses, in Chapter 14, Section B.

They give special rights to foreign corporations to bypass local courts and sue governments for millions of dollars in extra-national tribunals if they believe a change in law or policy will harm their investment.

The tobacco giant Philip Morris tried it in 2011 using investor-state dispute settlement provisions in an obscure Australia Hong Kong agreement after it lost a fight against Australia’s plain packaging laws in the High Court. It eventually lost in the international tribunal, although after four years and at the cost to Australia of nearly 40 million dollars.

Article 12.9 of the Indonesia-Australia agreement will give Indonesia an additional 4,000 temporary working holiday visas, and a commitment over the next three years to negotiate arrangements for more “contractual service providers”.

Unlike permanent migrants, who have the same rights as other workers, temporary workers and contractual service providers are tied to one employer and can be deported if they lose their jobs, and so are vulnerable to exploitation, as shown by recent research.

After signing, the implementing legislation has to be passed by both the Australian and Indonesian parliaments before it can come into force.

And not for some time

In Australia, the next steps are for the treaty to be reviewed by the Joint Standing Committee on Treaties. But the likely calling of the federal election in April will dissolve this committee. The committee will be reconstituted after the election with the winning party having a majority.

Last year Labor faced a strong backlash from its membership and unions when it supported the implementing legislation for the TPP-11 despite the fact that it was contrary to the then Labor policy.

This led to the adoption of an even stronger policy at its national conference and a draft bill that would apply to both future and existing trade agreements.

It requires independent assessments of the economic, social and environmental impacts of future trade agreements before they are ratified, outlaws investor-state dispute settlement clauses and the removal of labour market testing for temporary workers, mandates labour rights and environmental clauses and requires the renegotiation of non-compliant agreements should Labor win office.

If the Coalition wins office but not a Senate majority, and Labor implements its policy, a Coalition government could face opposition to ratification of the Indonesia-Australia agreement in the Senate.

If Labor wins government, it will face pressure from its base to implement its policy to conduct an independent assessment and renegotiate the provisions before ratification.

In Indonesia, which has elections in April, the deal could also face a rocky road.

Criticisms of the process led civil society groups to lodge a case which resulted in a ruling by the Indonesian Constitutional Court in November that the Indonesian President cannot approve trade agreements without parliamentary approval.

The opposition parties have been sceptical about the deal. Azam Azman Natawijana, deputy chairman of the parliamentary committee overseeing trade, was quoted in The Australian saying he expected the ratification process to be protracted.