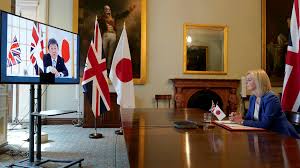 Japan and the U.K. are studying a plan of not including an investor-state dispute settlement (ISDS) system in the bilateral trade deal they are currently negotiating, it was learned Tuesday.

Japan had sought the introduction of the system, but is now considering setting it aside in favor of reaching an early accord so the deal can be put into effect in January next year, according to sources.

An ISDS system allows corporations and investors to demand compensation for damage they suffer due to sudden changes in government policy in the countries they have entered to do business.

The system is included in the Trans-Pacific Partnership multilateral free trade pact, to which Japan is a party. Japan also pushed for it to be included in its economic partnership agreement (EPA) with the European Union, but the proposal was rejected by the EU.

Japan and Britain agreed to make their planned trade deal go further than the Japan-EU EPA. However, the clock is running out for negotiations, as they would need to reach a formal agreement by this autumn in order to have the deal in place on Jan. 1 next year, when Britain is slated to complete its transition period out of the EU.

Japanese Foreign Minister Toshimitsu Motegi and British Secretary of State for International Trade Liz Truss are expected to hold talks in early August to break the deadlock in sensitive areas, such as the scrapping and reduction of tariffs, in an effort to reach a broad agreement.

Britain is also showing strong interest in participating in the TPP. Even if the ISDS system is not included in the Japan-Britain trade deal, it may be the subject of contention if Britain seeks to join the TPP.

Japan had signed investment agreements with 78 economies as of March this year, with the first being a pact with Egypt concluded in 1978. An ISDS system is generally designed for inclusion in treaties with developing countries in which legal systems are inadequate.

A source involved in the Japan-Britain negotiations said that there are doubts over whether the system is needed in a pact with Britain, a developed country.