As Techdirt has reported, the election of Donald Trump has turned the world of US trade deals upside-down. The US officially pulled out of TPP, although some still hope it might come back in some form. TAFTA/TTIP seems to be on ice, but Trump’s choice for US trade representative has just said he is open to resuming negotiations, so it’s not clear what might happen there (or with TISA). Against that confusing backdrop, the European Union has been quick to emphasize that it is in favor of trade deals, and is keen to sign as many as possible, presumably hoping to fill the economic and political vacuum left by the US.

One of the negotiations that has been going on in the background is for a major trade agreement between the EU and Japan. It began back in March 2013, but has garnered little attention, as people focused on the more imminent threats of TPP, TTIP, CETA and TISA. That’s just changed, thanks in part to a joint statement signed by dozens of civil societies in both the EU and Japan, who write:

the European Union and the Japanese government have been negotiating a deep and comprehensive trade agreement which would cover a third of the world’s GDP. The 18th round of negotiations took place in Tokyo in December 2016, and whilst the negotiations might come to a close soon, on the EU side, the mandate given to the negotiators is still not public, and on the Japanese side, secrecy is total. … Neither most parliamentarians in EU member states and in Japan, nor European and Japanese civil society organisations and trade unions know the content of the discussions. Nor have they seen draft chapters or been consulted. We condemn this opacity. 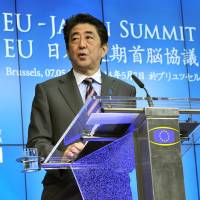 The other factor that has suddenly put the spotlight on JEFTA — the Japan-EU Free Trade Agreement — is the first leak of some of the negotiating documents, to the Austrian site Attac. Unfortunately, we don’t have the actual pages yet, only a summary (original in German). That broadly confirms the information contained in one of the few detailed documents on the EU’s official JEFTA site, the 314-page Trade Sustainability Impact Assessment (pdf) prepared for the European Commission in 2016, and largely overlooked.

Although that document is a study, and therefore speculative, it does contain some important information. For example, like most other EU agreements, JEFTA will include a corporate sovereignty chapter, also known as investor-state dispute settlement (ISDS). As Techdirt has described, the EU is trying to establish a new, possibly global court that would hear all such cases, called the Investment Court System. It still only exists on paper, but that didn’t stop it being part of the CETA deal. The JEFTA Trade Sustainability Impact Assessment has this to say on the matter:

Whether or not the final outcome is based on the Commission’s new Investment Court System (ICS), Japanese business tend to comply with the regulations of the host countries rather engage in investor-state disputes. There is only one known case of Japanese (indirect) involvement in an ISDS case, via a Dutch subsidiary operating in Czech Republic.

That is, Japanese companies prefer to use the national court systems of the countries they have invested in when there is some kind of legal dispute. This is precisely how things should work. And yet the EU is pushing for the inclusion of a completely parallel legal system, only available to investors, that would allow domestic courts to be by-passed and overruled. Here’s why it’s so keen on the idea:

exclusion of ISDS from the EU-Japan negotiations would be contrary to the emerging norm in comprehensive trade and investment agreements. Japan does not see the inclusion of ISDS as a difficulty.

The inclusion of ISDS is not part of an "emerging norm", but purely a matter of EU policy — dogma, even: the European Commission wants to make it a part of all trade deals, and so aims to include it in JEFTA, even though Japanese companies are perfectly happy to use national courts. The Sustainability report admits that including an investment chapter will have little effect:

Investment flows (in both directions) are likely to be driven by an improved business environment and better profit margins — which the investment chapter alone has only a moderate impact on. The economics effects are symmetrical, but moderate.

Even though Japanese companies might not use ISDS, there’s a big downside to including it. Following CETA, it is likely that JEFTA will allow investors from other countries — for example, multinational corporations with significant subsidiaries in Japan — to use the chapter to make claims against the EU. Including corporate sovereignty unnecessarily, just to set a precedent, could come back to haunt the European Commission in the future if major awards are made as a result. The Sustainability report also touches on the issue of copyright, pointing out:

Another central issue in the EU-Japan FTA negotiations is the lack of protection for the use of sound recordings for public performance in Japan.

The EU will doubtless try to force Japan to rectify that omission. Similarly, the basic term of copyright protection varies between the EU and Japan: 70 years for the former, 50 years for the latter. Again, the European Commission will want to turn the copyright ratchet to extend Japan’s term to match the EU’s. Finally, it’s worth noting that the EU’s official study contains an estimate of the benefits that could flow from JEFTA:

The long-term GDP increase for the EU is estimated to +0.76% and +0.29% for Japan under a symmetrical scenario.

It’s important to emphasize that this is "long-term": what this means is that the GDP could be higher by the percentages quoted after ten or more years. The average extra GDP growth per year is therefore an even smaller 0.08% and 0.03% for the EU and Japan respectively. That is, like TTIP and TPP, the predicted benefits that will accrue from JEFTA are likely to be very small, while the risks and possible losses in terms of ISDS fines, say, have been ignored completely.

But the worst aspect of JEFTA is not that it’s probably not worth the effort, but that the EU and Japan have done everything they can to prevent both the public and even politicians from finding out what a bad deal is being negotiated in their name. After the humiliating defeat of the Anti-Counterfeiting Trade Agreement (ACTA), and the more recent failures of TPP and TTIP, you would have thought that the governments involved would have realized that this kind of secret dealmaking just isn’t acceptable any more, but apparently, they haven’t. Fortunately, JEFTA is finally out in the open, which means it can begin to be subjected to long-overdue scrutiny and democratic input. What we need now is for the EU to release negotiating texts as it did for TTIP.