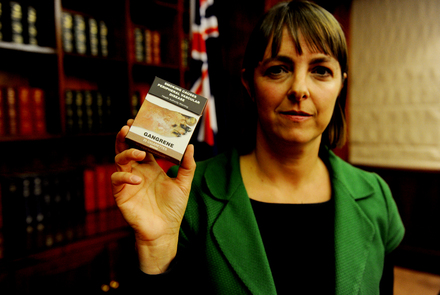 Mandating plain packaging for tobacco products is the latest step in the bid to minimise the harms from cigarette smoke. AAP

Legislation requiring tobacco products to be in plain packaging was passed by the House of Representatives last night. This is the first such measure in the world to become law.

We asked a roundtable of experts to respond to the news.

Colin McLeod, Associate Professor & Executive Director, The Australian Centre for Retail Studies at Monash University, looks at the possible impact of the legislation on the retail industry.

The whole issue of tobacco is a challenging one for the retail industry.

The passage of the plain packaging bill yesterday adds to the complexity and if the bill succeeds in achieving the objectives stated by Heath Minister Nicola Roxon, retail sales of tobacco will fall.

In many retail sectors tobacco sales still represent between a fifth and a third of sales revenue. While it’s legitimate to argue that retailers should have weaned themselves off their reliance on a product category that is under substantial threat from regulation and community attitudes, this has been difficult.

Part of the problem for retailers is that while volumes have fallen as the proportion of the population who smokes reduces, the drop has been largely offset by upward changes in the price of tobacco products.

While some of this has been due to price increases by retailers and wholesalers, it’s worth noting that about 65% of the cost of a packet of cigarettes is federal excise duty plus GST. Although in fairness to our Federal Government, this is at the lower end of comparable OECD countries.

The net effect is that tobacco products have maintained their financial significance to the retailer as a share of turnover.

The other major issue for retailers is that they are members of the communities that they serve, and they have to find a balance between understanding and responding to community attitudes and running a viable business.

Tobacco represents a unique case, as other product categories can develop alternative strategies – for example McDonald’s can introduce healthy meals or Mars can reduce the fat content of their products in response to community concerns about childhood obesity.

But there is no middle ground on tobacco, as can be seen from the response of public health experts to yesterday’s announcement – we can’t find a healthier way to smoke.

First, it will help to reduce smoking in adults by encouraging them to quit, and in children by removing the tobacco industry’s last advertising vehicle.

It shows that a determined minister (Nicola Roxon) acting on expert advice and compelling evidence, supported by unanimous health and medical support, can face down massive (and massively misleading) advertising and public relations campaigns, as well as lobbying and legal campaigns by the world’s most lethal industry and its shadowy allies.

Despite some sadly misinformed speeches from a few oppposition politicians, all-party support for the plain packaging bill shows that Australian politicians can work together to reduce our largest preventable cause of death and disease.

But perhaps crucially, this is a precedent that, once set, will be followed over time by many other countries. The history of tobacco control shows that the domino theory justifies every tobacco executive’s worst nightmare.

Legislation (and other important measures, such as major mass media programs) are always fiercely opposed by tobacco interests; but when one country or state shows the art of the possible, the others follow.

The argument that “nobody else has done it” will no longer apply. Other countries and other governments will be encouraged by the Australian Government’s world-leading initiative, and will note that the tobacco industry’s credibility has fallen even further, aided by so many leaks and revelations about its deceptive tactics.

Public health campaigners will press for action, confident that they have all the ammunition they need, from research evidence to advocacy approaches.

The Australian tobacco industry is entirely controlled from London (British American Tobacco and Imperial Tobacco) and New York (Philip Morris). The global industry has poured tens of millions into opposing plain packaging here, partly because they know it will work, but above all because they are desperate to prevent measures like this from being introduced in other countries.

There is much yet to be done, but the tobacco wars are being won in Australia. Plain packaging serves as a beacon to the rest of the world, especially developing countries, where the new battlegrounds are forming and hundreds of millions of lives are at stake.

Professor Rob Moodie, the inaugural Chair of Global Health at The University of Melbourne discusses the possible impact of the law in global public health.

It’s well known that tobacco companies use packaging as a way of advertising and promoting their products, so this is a very significant legislation that strikes at the very heart of Big Tobacco.

And it’s clear from the reaction of tobacco companies that they’ve taken it seriously. Their willingness to invest in massive advertising campaigns and to vilify the health minister is evidence that this law will have an impact.

The passing of the Bill is particularly important as a prelude to the September High-level Meeting on Non-communicable Diseases in New York because it will help strengthen the global resolve to act against tobacco and its harms.

We should all remember that in the Reputation Institute’s 2009 Global Reputation Pulse Report, the tobacco industry comes last. It has repeatedly shown that it has very deep pockets and that it’s willing to threaten, sue and bully to get its own way.

The law is a very important leap forward because it starts to protect the public from what is a really dangerous product.

This move will give other countries encouragement to initiate public health measures that will help minimize tobacco’s harms for their populations.

Deborah Gleeson, Research Fellow in the School of Public Health and Human Biosciences at La Trobe University, examines what this means for the negotiations for the Trans Pacific Partnership Agreement.

Australia’s leadership in tobacco control must extend to trade agreements

Australia is taking a leadership role in global tobacco control. This leadership must also extend to trade agreements that threaten the success of tobacco control by enabling Big Tobacco to take legal action against governments.

The burden of premature death from tobacco use is disproportionately borne by low and middle income countries, many of which have yet to introduce effective tobacco control policies.

In many countries where smoking rates are high and economies are closely enmeshed with the tobacco industry, tobacco companies hold far more power than they do in Australia.

It is vitally important that the tobacco industry is not granted additional powers to take legal action to oppose tobacco control measures recommended by the World Health Organization.

The Trans Pacific Partnership Agreement currently being negotiated between Australia, the United States, New Zealand, Chile, Singapore, Brunei, Peru, Vietnam and Malaysia is one such trade agreement. Three more rounds of negotiations are planned for later this year and member countries are now tabling draft text and making their positions clear.

The United States Government is seeking investor state dispute settlement provisions in this agreement that would grant powers to foreign companies to sue governments directly in international courts over public health legislation. Philip Morris International has indicated that it would sue the Australian Government if such provisions were included in the agreement.

Australia’s position against these provisions is strong. The Government’s Trade Policy Statement released in April 2011 states it “will not accept provisions that limit its capacity to put health warnings or plain packaging requirements on tobacco products” (p. 14).

This is welcome news for public health advocates.

But Australia’s stance on the inclusion of these provisions for other members of the Trans Pacific Partnership is less clear. The provisions would make countries like Vietnam and Malaysia even more vulnerable to the bullying tactics of Big Tobacco.

The next round of negotiations, in September, presents an ideal opportunity.

Australia must take its leadership role seriously and ensure that the investor state dispute settlement is kept out of the Trans Pacific Partnership Agreement. This will deal a big blow to the global bullying capacity of Big Tobacco.

Luke Nottage, Associate Professor in the Sydney Law School at The University of Sydney, discusses the possible impact of the legislation on bilateral investment treaty law and practice.

The plain packaging legislation passed the Australian Parliament stuck to the original proposal for implementation.

So Philip Morris Asia (PMA) is likely to commence investor-state arbitration (ISA) proceedings after expiry of the 3-month “cooling off” period under Art 10 of the 1993 Australia – Hong Kong bilateral investment treaty (calculated from notification of the dispute on 27 June).

The Gillard Government has closed off one avenue for settling this dispute by enacting legislation but delaying its implementation, to give more time for PMA and other companies to prepare for the new regime.

Even if the possibility of delaying implementation comes up in arbitral proceedings, perhaps due to arbitrators attempting to facilitate early settlement (‘Arb-med’), the Government will now find it politically difficult to backtrack in this respect.

Early and cost-effective settlement during arbitral proceedings will also become harder if the Government decides that it’s worth risking billions of dollars to compensate PMA in exchange for savings in many more billions spent annually on tobacco-related illnesses.

More cynically, the Gillard Government may be thinking that it will get votes in the short-term by coming down hard on tobacco companies with this legislation, without having to take much responsibility for a compensation payment if and when the tribunal reaches a final decision because that may take several years.

The recent escalation of the Gillard Government’s dispute with PMA is unfortunate for another reason. It will entrench the view in the April “Trade Policy Statement” that ISA should not be included in any future investment treaties.

This stance goes far beyond the Productivity Commission’s recommendation on ISA in its Inquiry Report last year, yet the Commission’s economic theory and evidence was already questionable.

Australia seems now to have thrown out the ISA baby with the bathwater. This has serious implications for economic integration initiatives particularly in the Asia-Pacific region, including ongoing FTA negotiations with Japan.

A longer version of Luke Nottage’s contribution can be found at on the “Japanese Law and the Asia-Pacific” blog.