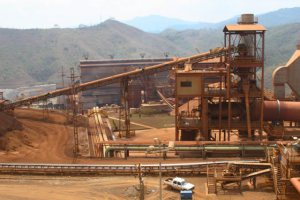 Socialist-run Venezuela in 2009 formally ended the concession in one of Latin America’s largest gold deposits as part of a strategy to increase state control of key economic sectors.

Gold Reserve then sought $2.1 billion in damages at the World Bank’s ICSID for what it deemed an expropriation.

"While the company is pleased with the award, it is less than the value of the Brisas project at today’s gold and copper prices and Venezuela will substantially benefit from the development of the mine," the company said in a statement on its website.

"We are hopeful that Venezuela will satisfy its obligations to the company without delay and without any further legal proceeding," Gold Reserve President Doug Belanger added.

"Should they fail to do so, we are prepared to pursue all available means to ensure that the amount awarded to the company is recovered in full."

The award comes at a tricky time for the South American OPEC country, which is struggling to shore up its coffers amid an economic crisis.

The late president nationalized large swaths of the economy, including mines, factories and oil fields, saying Venezuela should have ownership of its strategic resources.

The government did not respond to requests for comments.

There were no details on the ICSID website. (Reporting by Alexandra Ulmer; Editing by Ken Wills)