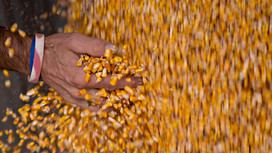 MEXICO CITY (Reuters) — U.S. agribusiness company Cargill Inc. filed a suit in a U.S. court on Tuesday to compel Mexico to pay a $94.6 million award over trade barriers the company says Mexico put up against high-fructose corn syrup from 2002 to 2007.

Mexico’s economy ministry, named as defendant in the case, did not immediately respond to a request for comment.

Nicole Reichert, Cargill’s communications director for corn milling, told Reuters that the firm had filed an enforcement action to preserve its legal rights while awaiting payment.

In May, the Supreme Court of Canada let stand a unanimous NAFTA arbitration panel decision that Mexico should pay Cargill more than $77 million plus interest and legal costs.

The original 2009 award has since risen more than 22 percent due to interest, the company said in its filing.

The case was heard in Canada because that is where the original NAFTA panel was held.