Last week, a German energy company called Uniper (a subsidiary of Finnish state-owned Fortum) initiated a claim against the Dutch government under the investment protection provisions of the Energy Charter Treaty (ECT).

The company, which owns the Maasvlakte 3 coal plant near Rotterdam, argues that the “Dutch Coal exit law lacks adequate compensation for stranded investments”. Uniper’s press release did not specify what would be “adequate”, but previous reports suggest the company is seeking a payout of 1 billion euros.

This comes on the heels of Germany energy giant RWE’s 1.4 billion euro ECT-case against the country over the same policy, launched in February. An RWE spokesperson said the Dutch coal phaseout was “not legal” because it does not include "adequate compensation for this interference with the company’s property”.

This is exactly the type of scenario that Lorenzo Cotula and I modelled in an IIED report published last October. We developed a framework for assessing the extent to which energy transition measures could result in investor claims for compensation in a system called investor-state dispute settlement (ISDS).

In particular, we focused on government measures that have direct impacts on investors in the fossil fuel sector, such as measures to limit extraction, transportation and combustion of coal, oil and gas.

We conducted a case study of the coal power sector. In brief, government-mandated coal power phase-outs can result in certain coal plants being shuttered prior to the end of their economic life and this can mean loss of sunk investment and/or expected future profits. Research indicates that when governments force or accelerate asset stranding in this way, many businesses expect to be financially compensated.

The investment regime – made up of over 2600 bilateral and plurilateral treaties – can have far-reaching repercussions on negotiations between states and business actors on appropriate compensation.

As the Uniper and RWE cases demonstrate, foreign investors may resort to ISDS to sue states over measures to phase out coal power if there is no compensation offered or if they believe the compensation offered is insufficient. Even in the absence of legal proceedings, the explicit or implicit threat of recourse to ISDS can enhance businesses’ position in negotiations with states.

Of course, states’ exposure to potential ISDS claims depends on the extent to which treaties with ISDS apply to fossil fuel investments.

For our case study, we developed a dataset of 257 coal power plants that clearly involve foreign investment and present a reasonable risk of asset stranding in a Paris Agreement-aligned world.

We found that 75% of these plants are owned by parents that are covered by a treaty providing access to ISDS. This is likely a significant underestimation of treaty coverage. Prevailing interpretations (PDF) about reflective loss in arbitration would indicate that many more of these plants, or indeed all of them, could be the subject of an ISDS claim. 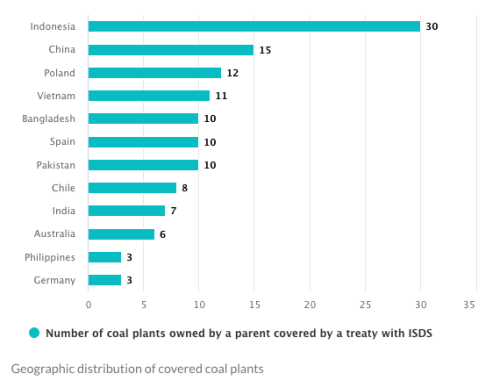 Importantly, our findings also shed light on the uneven geographic distribution of liabilities, with Europe and Southeast Asia emerging as key regional hotspots. In the particular case of coal power, countries in the global South may be exposed to bigger ISDS claims as plants are typically younger in these countries, so investors are more likely to suffer large financial losses in the energy transition.

The challenges of delivering Paris pledges

Our case study also highlights that certain treaties, such as the afore-mentioned ECT, play a particularly significant role. The ECT protects at least 51 power plants that should be shuttered early to meet the objectives of the Paris Agreement.

The ECT is currently undergoing a modernisation process where climate change has become a significant issue. That process demonstrates some of the challenges of trying to align investment treaties with the Paris Agreement. Indeed, a number of governments appear to be actively contemplating withdrawal from or termination of the ECT.

While our report focused on coal, this is really just the tip of the iceberg in terms of potential stranded assets – many investments in oil and gas and related infrastructure such as pipelines are much more recent than those in coal.

A recent report estimated that Europe risks 87 billion euros worth of stranded assets in the gas sector. It is not hard to imagine ISDS cases emerging linked to a variety of different fossil assets in the near future. Indeed, it is possible that the Biden administration’s cancellation of the controversial Keystone XL pipeline could soon end up in arbitration.

Overall, our report raises two key concerns. The first is that the implicit or explicit threat of ISDS will result in governments delaying action on climate change, which is often framed as ‘regulatory chill’.

A second concern is that when governments do proceed with climate measures, investment treaties will serve to increase the amount of compensation that investors receive, thereby raising the cost of the transition and reducing the public funding available for green investments.

To be clear, we do not address the question of whether fossil fuel investors should be compensated when they are negatively impacted by measures taken to address the climate emergency, which is a complex issue.

Instead, we focus on whether investment arbitration is the correct forum to determine when and how much compensation is appropriate, particularly in light of the tendency of tribunals to adopt methods like discounted cash flow that are highly speculative and often result in very large awards. These large awards also cast a shadow over negotiations between investors and governments.

Time to widen the debate

The conflict between investment treaties and climate change mitigation is an issue that governments urgently need to address.

A number of forums are discussing “reform” of treaties and ISDS (PDF), but the scope of these discussions is limited, and progress is slow. These discussions also tend to be dominated by actors that have a vested interest in the investment arbitration system continuing.

As such, I believe it is time for the conversation to move out of the investment policy sphere and into the broader debate about how we can achieve a rapid and just energy transition.

This blog is based on Kyla Tienhaara’s presentation shared at last month’s OECD Conference on the Future of Investment Treaties.