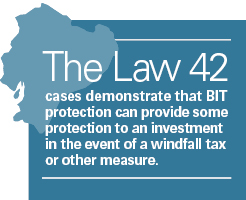 Bilateral Investment Treaties (BITs) afford investors a series of guarantees against expropriation or unfair treatment of investments in foreign jurisdictions. They also typically allow investors to enforce those rights before a neutral international arbitral tribunal under the rules of the International Centre for Settlement of Investment Disputes (ICSID) (affiliated with the World Bank) or the United Nations Commission on International Trade Law (UNCITRAL).

More than a decade ago, a number of oil companies, including Burlington, Occidental (Oxy) and Perenco, entered into long-term production-sharing contracts (PSCs) with the government of Ecuador to develop oil fields in the Ecuadorian Amazon. [2] Under those contracts, private investors assumed the risks and costs associated with the exploration of oil reserves in a designated area in return for a share of any oil eventually discovered. In 2002, an increase in oil prices prompted some local constituencies to accuse foreign investors of reaping excessive profits. Over the next several years, the Ecuadorian government sought to renegotiate the terms of the PSCs with foreign companies, including Burlington, Oxy and Perenco. In 2006, with no agreement having been reached, the Ecuadorian Congress enacted Law 42, which allocated to the government in the form of a 50 percent tax of the so-called windfall profits of hydrocarbon producers and defined windfall as any "non agreed or unforeseen surpluses from oil selling prices." [3] In 2007, Law 42 was amended to increase the windfall tax rate from 50 to 99 percent. [4]

These measures sharply reduced the profitability of foreign-owned oil operations within Ecuador. Many claimed the taxes violated their rights under the PSCs and international law, while seeking (unsuccessfully) to negotiate an adjustment of the levies. Others, like Perenco, ceased production. Both Perenco and Burlington then commenced separate BIT arbitrations before ICSID, claiming that Ecuador’s actions violated the PSCs as well as its obligations under the French-Ecuador BIT and U.S.-Ecuador BIT, respectively. In 2009, Ecuador physically took over the operations of Perenco and Burlington and canceled their PSCs. [5]

US-Ecuador BIT and the Limits of Jurisdiction Over ’Taxation’ Measures

As is typical in most BITs, the treaties in the Burlington, Oxy and Perenco disputes provided protection against "expropriation" and guaranteed "fair and equitable treatment" (the FET clause). But those treaties (in the case of Perenco, the France-Ecuador BIT, and, in Burlington and Oxy, the U.S.-Ecuador BIT) contained different wording on the critical issue of tax. In the Burlington case, this difference has had potentially significant consequences.

Specifically, although Articles II and III of the U.S.-Ecuador BIT contained protection against expropriation and also an FET clause and other guarantees (such as "full protection and security"), Article X of the U.S.-Ecuador BIT provided a carve-out for "matters of taxation." Thus, the FET and other guarantees did not apply to a measure that was a tax. [6] As a result, if the challenged measure was characterized as a tax, it could only be deemed to breach the treaty if the tax itself was tantamount to expropriation or nationalization.

Seizing on this provision, Ecuador moved to dismiss Burlington’s FET and other non-expropriation claims, arguing that Law 42 constituted a tax and was thus subject to the Article X carve-out. [7] In a 2010 decision, a 2-1 majority of the Burlington tribunal upheld this argument. [8]

In contrast with the above two cases, the Perenco claim was subject to the France-Ecuador BIT, which contains a more limited carve-out for taxation measures. Because of this difference in wording, Perenco was able to pursue and ultimately prevail on a claim that Law 42 violated Ecuador’s FET obligations under that treaty — essentially the same argument that was barred in the Burlington arbitration. [9] Consequently, the tax-exemption language in the France-Ecuador BIT provided greater investor protection than the U.S.-Ecuador BIT, a difference that may well affect the amount of compensation that can be awarded in the forthcoming quantum phase of the Perenco arbitration. [10]

Whether Law 42’s Windfall Tax Is an ’Expropriation’

Neither the Burlington nor the Perenco tribunal found that Law 42 constituted an expropriation. Both tribunals acknowledged that a tax would constitute an expropriation if it was confiscatory in nature and its effects caused a "substantial deprivation" or "diminution" of an investment. [11] They held, however, that to demonstrate a "substantial deprivation," an investor must prove that its "investment’s continuing capacity to generate a return has been virtually extinguished." [12]

This threshold was not met in either arbitration ; both tribunals held that at 50 percent, Law 42 did not constitute a "substantial deprivation" of either Burlington’s or Perenco’s investment. [13] A majority of the Burlington tribunal noted that, by definition, it would be unlikely that a windfall tax would qualify as an expropriation :

The Law 42 tax is a so-called windfall profits tax, i.e., a tax applying to oil revenues exceeding the ones prevailing at the time the PSCs were executed. By definition, such a tax would appear not to have an impact upon the investment as a whole, but only a portion of the profits. On the assumption that its effects are in line with its name, a windfall profits tax is thus unlikely to result in the expropriation of an investment. [14]

Arbitrator Francisco Orrego Vicuna dissented and argued that the windfall taxes, particularly at 99 percent, constituted an expropriation when viewed in the overall context. [15] Critical to the Burlington majority’s holding was evidence that the investment continued to have a potentially positive cash flow following enactment of the measure, albeit radically reduced ; thus, although "Law 42 at 99% diminished Burlington’s profits considerably," Burlington’s investment still "preserved its capacity to generate a commercial return." [16]

The Perenco tribunal’s analysis was similar. It held that at 50 percent, "Law 42 reduced Perenco’s profitability [but] it did not deprive the Claimant of its rights of management and control over the investment in Ecuador, nor did it reach the requisite level of a substantial diminution in the value of that investment." [17] Next, it held that although the tax at 99 percent made "operating conditions highly sub-optimal," it did not amount to an expropriation because Perenco’s business was not "effectively taken away from it." [18]

The third case, Occidental v. Ecuador, like Burlington, was decided two years prior to Perenco. Oxy addressed Law 42 in a somewhat different context. In Oxy, the Ecuadorian government issued a 2006 administrative decree, purporting to rescind Oxy’s rights under its PSC. In a 2012 award, this action was found to have been an unlawful expropriation. Although Law 42 was enacted only a month before the administrative decree was issued, it nevertheless became relevant to damages — specifically, whether, absent the cancellation, Oxy could reasonably have expected to have earned significant revenue after 2006 or whether its revenues would have been curtailed by Law 42. [19] By a 2-1 majority, the Oxy tribunal held that Law 42 was not properly characterized as a tax, among other things because "it was not ’created’ in accordance with the Ecuadorian Constitution," [20] with the result that : (1) Article X’s tax carve-out did not apply ; (2) it was thus open to the tribunal to view Law 42 as a measure that violated the FET obligations because it unilaterally modified the contractual and legal framework that existed when the PSCs were executed ; [21] and (3) in assessing Oxy’s damages (based on a discounted cash flow analysis) the tribunal rejected Ecuador’s argument that cash flows should be discounted for the effect of the windfall taxes in Law 42 on potential profits, because this would allow Ecuador "to profit from its own wrongdoing." [22] The result was a $1.7 billion award of damages, which Ecuador is now challenging before a three-member "annulment" committee convened under Article 52 of the ICSID Convention.

Physical Seizure and Declaration of Caducidad Amount to Expropriation

Both the Burlington and Perenco tribunals held that Ecuador’s subsequent actions following the implementation of Law 42 constituted an expropriation. However, their reasoning differed. The Burlington tribunal found that Ecuador’s physical seizure of the oil fields was an expropriation. By contrast, the Perenco tribunal noted that Perenco had abandoned its operations prior to the physical takeover, meaning Ecuador was justified in seizing the oil fields in order to ensure their continuity and productivity. The tribunal held that an expropriation did not occur until Ecuador issued an administrative decree (caducidad) cancelling the PSC. [23] The impact of these findings, from a damages perspective (and the timing of the valuation date), is yet to be determined but could vary depending on when the tribunal finds that the expropriation began. Implications

All of the above cases are still pending and subject to further quantum phases and/or annulment appeals. At least one other challenge to Law 42 (by Murphy Oil) also is under way. Nevertheless, some preliminary observations are warranted. The Burlington, Oxy and Perenco decisions demonstrate that BIT protection can provide some (but by no means comprehensive) protection to an investment in the event of a windfall tax or other measure. Moreover, not all confiscatory taxes will violate BITs, particularly if the relevant BIT has a broad tax carve-out clause that excludes taxation from review under the FET standard, as is the case under some U.S. BITs.

As a result, investors should consider adding taxation safeguards to their PSCs or other investment contracts with host state governments (through stabilization or similar clauses), and explore any features of the relevant BIT that would cover their investment. Such an assessment should be made in the overall context of evaluating how best to maximize investment protection and safeguard against expropriation or related risks in the foreign market in question.

[9] Perenco (Liability) ¶ 627. The Perenco decision also illustrated a noteworthy feature of the France-Ecuador BIT : The definition of "national" in Article 1(3)(ii) notes that BIT permits non-French companies to claim French nationality on the basis that they are subject to "control" by a French national. See Perenco (Liability) ¶ 216. As a result, Perenco (a Bahamian company) successfully established French nationality on the basis that it was owned and controlled by a French family. Id. ¶ 514, 527-30.