Will Chevron get away with destroying the Amazon? 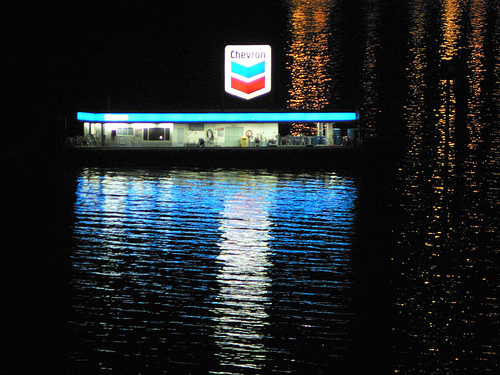 Will Chevron Get Away with Destroying the Amazon?

For much of its history, Lago Agrio, in the northeastern Ecuadorean province of Sucumbíos, was a patch of pristine Amazonian rainforest inhabited primarily by local indigenous peoples. Then Texaco arrived in the 1960s. It began full-scale oil producing operations shortly thereafter, continuing until the early 1990s. During this time, 1,700 square miles of Amazonian rain forest were transformed into an environmental disaster marred by toxic oil-drilling byproducts and crude oil that were improperly contained and/or disposed of.

Shortly after Texaco pulled out, a long legal battle began between the oil company (carried on by Chevron after a 2001 merger) and the local settlers and indigenous peoples, “Los Afectados.” Since then, the case has drawn international attention from human rights activists, similarly affected communities, multinational corporations, government officials and various media outlets. Troublingly, the problem has also come under the guise of the newest legal gimmick available to many multinational corporations attempting to protect their bottom line in the face of larger human rights concerns — international arbitration.

Litigation over the ecological disaster that is Lago Agrio has produced a decades-long narrative that rivals Finnegans Wake in complexity. Since 1993, the case has meandered through a change in venue, an ill-fated oil company-government agreement, legal delay-tactics, hundreds of thousands of pages in court filings, and allegations of violent intimidation, fraud, and corruption.

However, the final decision over who will be responsible, at least financially, may come down to a trio of international investment lawyers interpreting a bilateral investment treaty (BIT) drafted by another set of investment lawyers. On March 30, a tribunal at the Permanent Court of Arbitration in The Hague deemed that judicial delays in a separate contractual dispute with Chevron violated the Ecuador-U.S. BIT. The decision (PDF) awarded just under US$700 million to the oil company, a sum that accounts for one-fifth of the country’s international reserves.

Lago Agrio looms significantly in the background, however. Ecuador’s Attorney General has interpreted the arbitration decision to be part of a larger effort to evade the potential fallout from an adverse ruling. Moreover, Chevron is also trying to take Ecuador to international arbitration for its handling of the Lago Agrio case. Ecuador is currently appealing a U.S. court’s refusal to stay the arbitration proceedings. The irony in all of this is that it was Chevron that initially sought to have the case moved to Ecuador from the U.S. At the time, Chevron even submitted 14 expert affidavits attesting to the fairness and adequacy of Ecuadorean courts.

Disturbingly, Chevron is not alone in appealing to international arbitration procedures when human rights interfere with profits. International arbitration has been used by other multinationals to challenge the application of affirmative action measures in South Africa, environmental regulations in El Salvador, and water rights in Tanzania. For many nations, BITs now hang like sword of Damocles over domestic efforts to protect human rights and the environment.

For seventeen years, the inhabitants of Lago Agrio have fought to have Chevron come back and clean up the mess Texaco left behind. Chevron is now seeking to pull one more vanishing act, this time to The Hague. For Los Afectados, this could mean that all of their efforts, and the ultimate recognition of their environmental rights, will be in the hands of a politically unaccountable and procedurally opaque tribunal of investment lawyers an ocean away.

Giovanni Mejia is a member of the International Human Rights Clinic at Harvard Law School.

UAH 460 mln AMCU fine is unreasonable, said the Director of Imperial Tobacco in Ukraine
Imperial Tobacco is working on available legal instruments of protection, including an international investment arbitration tribunal, to contest a fine imposed by Ukraine for anticompetitive concerted actions.

Carlyle vs. Morocco: Here are the Kingdom’s arguments to ICSID
For the Kingdom, Carlyle did not justify the existence of investments in Morocco. The American group invokes the Morocco-United States free trade agreement while the contracts with Samir concern entities based in the Cayman Islands.

Mauritius: Arbitration proceedings between Thomas Gosling and others - All claims dismissed
The case concerns a dispute submitted to the International Centre for Settlement of Investment Disputes (ICSID) on the basis of the UK-Mauritius BIT.