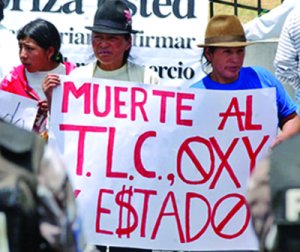 Ecuadoran protests against Occidental Petroleum. Photo courtesy of Patricio Realpe, from the archives of CONAIE. (FPIF)

When Bolivian President Evo Morales took office in January 2006, he pledged to follow through on his campaign pledge to increase Bolivians’ share of revenues from their major source of foreign income, natural gas. International gas companies, however, threatened to sue. Previous Bolivian governments had signed a flurry of bilateral investment treaties that gave foreign investors the right to bypass domestic courts and file such lawsuits through international tribunals. Morales complained that these rules made him feel like a “prisoner” in the presidential palace.

The Bolivian president’s predicament is a common one for political leaders around the world. They are caught in an interlocking web of rules and institutions that promote and protect foreign investment - with little regard for the costs to democracy, the environment, or the public welfare. These increasingly controversial investor protections have become the “get out of jail free” card for corporations in the global economy. They are promoted by the World Bank and other international financial institutions, codified by bilateral investment treaties and free trade agreements, and enforced through the World Bank’s arbitration court and other international tribunals.

Countries are pushing back against these investor protections. They might be able to find common cause with some in the U.S. Congress. But the deep pockets of the corporations and the rigged rules of the global economy pose significant obstacles.

Armed with unprecedented legal powers, foreign investors have literally gone wild. They can sue over alleged violations of a long list of protections. The most controversial guard against government actions, including environmental and public health laws, that diminish the value of their investment. While international arbitration judges cannot force a country to change its laws, they can award massive damages to the investor. And that threat alone can have a chilling effect. A U.S. chemical corporation, for example, succeeded in using investment rules in the North American Free Trade Agreement (NAFTA) to pressure Canada to repeal an environmental health regulation.

In the Bolivian gas case, the Morales government dismissed the threats and managed to renegotiate contracts with all the foreign investors, substantially increasing the governments’ revenues. Other leaders have not been so fortunate. In nearby Argentina and Ecuador, for example, governments are facing potentially crippling “investor-state” lawsuits.

Argentina has been socked by more than 30 such claims, many of them in retaliation for measures to alleviate the pain of the country’s 2002 financial meltdown. A U.S.-based gas company, for example, sued over an emergency law that froze utility rates to protect consumers from runaway inflation. The company, CMS Gas, won $133 million in compensation, money that could have compensated Argentine consumers.

Ecuador is facing a $1 billion suit by Occidental Petroleum, a company widely reviled in that country for alleged human rights and environmental abuses, including using child labor to clean toxic materials, failing to repair pipeline leakages, and operating in protected indigenous lands without authorization.

Occidental’s critics cheered when the Ecuadorian government gave Occidental the boot in 2006, charging that it had violated its contract by transferring a share of production to another foreign firm. The Bush administration immediately suspended trade negotiations with Ecuador, while the IMF entered the fray by advising the government to begin accumulating reserves to pay off a possible damages award. Ecuador’s Attorney General responded by accusing the IMF of “hateful partiality in favor of interests that have seriously hurt” the country.

In another case with disturbing human rights implications, Italian investors are targeting post-apartheid affirmative action policies in South Africa. They are suing over a law designed to redress historic racism by requiring mining companies to have 26% black ownership and 40% black management by the year 2014. These policies, the investors claim, violate protections against expropriation and discrimination in the Italy-South Africa bilateral investment treaty.

Currently, there are more than 100 cases pending before the World Bank’s International Centre for Settlement of Investment Disputes (ICSID), which decides most investor-state disputes. More than 90% have been against developing countries. Meanwhile, these rules are not delivering increased foreign investment. Tufts University researchers recently found that signing bilateral investment treaties with the United States had no effect on Latin American and Caribbean investment flows. In fact, Brazil, which has refused to sign any such deal with the United States, is by far the region’s biggest recipient of U.S. investment.

Canada currently faces a case in retaliation for terminating a project to transport garbage from Toronto to an abandoned open pit mine 600 kilometers (370 miles) away. To protest the mega-dump, the nearby Algonquin indigenous community joined with farmers and other local citizens in a railroad blockade that was the largest act of civil disobedience in the history of Ontario province. When the government responding by dropping the plan, it offered some compensation to the mine owners. But one U.S. investor is still using NAFTA to sue for lost potential profits.

In another case affecting indigenous rights, the U.S. government is currently defending against a Canadian company’s suit over regulations to reduce the environmental damage of a gold mining project on Quechan lands in southern California.

U.S. officials have met some resistance in their efforts to expand these investment rules. Their demand to include sweeping investor protections in the Free Trade Area of the Americas was one factor in the collapse of those negotiations, after 11 years of talks involving 34 countries. Similar proposals to incorporate such rules in the Organization of Economic Cooperation and Development through the Multilateral Agreement on Investment were aborted in the late 1990s, while developing country governments nixed plans to hold investment discussions through the World Trade Organization in 2003.

However, over the past 14 years U.S. trade officials have managed to insert excessive investor protections in trade agreements with 14 countries and in pending deals with four additional nations (as of May 1, 2007). The only exception is a 2004 U.S.-Australian deal. That country’s negotiators refused to accept investor-state dispute settlement. Worldwide, these rules have proliferated through more than 2,500 bilateral investment treaties. Fighting Back

On April 29, 2007, the leaders of Bolivia, Venezuela, and Nicaragua announced plans to withdraw from the World Bank’s arbitration court. Their joint declaration stated that "(We) emphatically reject the legal, media and diplomatic pressure of some multinationals that ... resist the sovereign rulings of countries, making threats and initiating suits in international arbitration."

This surprise announcement will not be enough, legally, to release the three Latin American countries from the interlocking web of rules and institutions designed to shield foreign investors. Bilateral investment treaties signed by Bolivia and Venezuela would still be in force, and getting out of them could take years. Nicaragua would still be bound by the investment rules of the Central American Free Trade Agreement. And ICSID is the dominant but not the only enforcement option. Foreign investors could instead demand that their cases be heard under similar United Nations arbitration rules.

Nevertheless, this announcement was tremendously significant on a political level and may empower other countries to challenge these excessive investor protections. Argentina and Ecuador are likely allies. Argentine Minister of Justice Horacio Rosatti has said, “ICSID does not have authority over the economic measures taken by a country during a crisis.” Ecuadorian President Rafael Correa has vowed to fight the Occidental Petroleum suit, stating that “Ecuador has not accepted and will not accept arbitration in ICSID or any other body.”

Replacing the current international investment rules with more just and equitable ones will require cooperation between North and South. In the United States, Democratic congressional leaders are considering new approaches to trade policy but have yet to call for an end to investor-state powers. They should begin a dialogue with governments that have been hardest hit by these excessive investor protections and learn from their experiences. Together, they could craft new rules that would allow governments to ensure that foreign investment supports the public interest - rather than being ruled by the corporate bottom line. Foreign investors have had their fun. It’s time to get them to act like responsible global citizens.

Guest columnist Sarah Anderson directs the Global Economy Project at the Institute for Policy Studies and is a frequent contributor to Foreign Policy In Focus. This article is adapted from a new report published jointly by IPS and Food & Water Watch, “Challenging Corporate Investor Rule,” available at: http://www.ips-dc.org/reports/070430-challengingcorporateinvestorrule.pdf