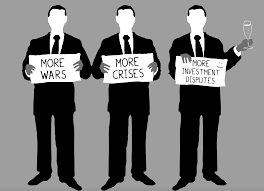 Governments around the world – including the UK – face a wave of lawsuits from foreign companies who complain that their profits have been hit by the pandemic.

Webinars and presentations shared with clients reveal that leading global law firms anticipate governments around the world will soon face claims over their response to the Covid-19 crisis. The actions are being brought under investor state dispute settlement (ISDS) clauses which are embedded in trade and investment agreements and allow foreign investors and firms to sue other countries’ governments.

The claims are heard in highly secretive ad hoc tribunals before a panel of three judges. Often it is not apparent that a case is being brought until the panel sits.

The law firm Alston & Bird used a recent webinar to predict that the UK will be sued over Sadiq Khan’s decision to close Crossrail construction sites during the pandemic. The decision was at odds with the government’s policy of allowing sites to operate throughout lockdown, an inconsistency that they say opens up the way for a legal challenge.

Law firm Reed Smith has predicted that measures taken by governments to deal with the crisis are affecting investments “directly and significantly and could give rise to substantial claims”.

And Ropes & Gray has issued an alert advising clients to consider actions brought under investment treaties as “a powerful tool to recover or prevent loss resulting from Covid-19-related government actions”.

There are particular concerns about claims being brought against governments in the developing world.

More than 600 civil society groups in 90 countries have written an open letter sounding the alarm. Signatories include Oxfam, Friends of the Earth, the International Trade Union Confederation (ITUC), SumOfUs and Global Justice Now. They warn at a “time when government resources are stretched to the limit in responding to the crisis, public money should not be diverted from saving lives, jobs and livelihoods into paying ISDS awards or legal fees to fight a claim”.

And they predict that a spate of cases now could result in a “regulatory chilling effect, in which governments water down, postpone or withdraw actions to tackle the pandemic for fear they will be sued”.

Countries including El Salvador and Bolivia have allowed citizens to delay payments for services such as water and electricity. Law firm Hogan Lovells has issued a client alert suggesting that foreign-owned utility companies could sue for lost revenue in such cases.

“Clearly, companies shouldn’t sue countries over emergency measures to save lives in a global pandemic, and we shouldn’t sign trade agreements that let them,” said Sondhya Gupta, UK campaign manager at SumOfUs. “We know lower-income countries are struggling most to contain the virus. The threat of rich corporations bullying them out of badly needed public funds to ‘compensate’ them for profit losses will further hamper efforts to fight the virus and add to the burden on future generations.”

Jean Blaylock, campaigns and policy manager at Global Justice Now, said the corporate courts which heard the claims often made awards far higher than those made by national courts. Of the more than 1,000 ISDS cases known to have been brought before the pandemic, 13 resulted in awards or settlements of more than US$1bn.

By the end of 2018, a raft of governments around the world had been ordered, or had agreed, to pay investors in publicly known ISDS cases a total of $88bn.

But there are now concerns Covid-19 will spark a claims bonanza which will benefit major law firms both bringing and defending the claims. “We have already heard of the threat of a case in Peru where the government there ordered toll roads to stop collecting tolls,” Blaylock said. “The government was worried that the act of taking money could be a way of spreading the pandemic.”

Blaylock added: “Why would a corporation sue? It seems so unreasonable, yet when you read the material from the law firms, to them it’s completely normal and they are expecting this to happen. They recognise there are incredibly valid public health needs, but they also understand that these courts are designed only to look at the interests of investors.”