"Bilateral Investment Treaties represent the codification of a new hierarchy which places private commercial needs above the protection of the public interest, blurring - seriously, and perhaps fatally - the boundaries between public and private interests."
— Susan Leubuscher [1]

The Netherlands has long been established as a place to do business and as more and more companies are finding out, all you need ‘to do’ business there is little more than a letterbox. So what are the advantages of owning a letterbox in the Netherlands? The answer is simple: it helps corporations to avoid paying taxes elsewhere [2] and enables them to take advantage of the corporate-friendly Bilateral Investment Treaties (BITs) the Netherlands has with other countries.

The Netherlands is home to about 20,000 of these letterbox companies and this number is rising, on average, by 5 every day. [3] One such company taking advantage of this corporate-friendly environment is Euro Telecom Italia N.V. (ETI), a wholly owned subsidiary of Telecom Italia SpA. ETI has no substantial commercial presence in the Netherlands, nor staff [4], but is currently attempting to take Bolivia to the International Center for the Settlement of Investment Disputes (ICSID), an arbitration tribunal at the World Bank, using the BIT the Netherlands signed with Bolivia in 1995. Indeed, the BIT between the Netherlands and Boliva contains some harsh conditions not usually seen in BITs: the term ‘investments’ has a very wide interpretation and the BIT also applies to investments made even before it was signed into force - to name just two of its draconian conditions. [5]

ETI has requested arbitration because the government of Evo Morales suggested that ETI, which holds a controlling share of Bolivia’s largest telecommunications company ENTEL, has been providing a poor service to Bolivians, has not been reinvesting enough in its telecommunications infrastructure, and at the same time been pulling out millions of dollars of profits out of the country. [6] The Bolivian government set up a commission to begin a review of ETI’s performance, demanded the payment of back-taxes, and attempted to negotiate with ETI a buy back of what used to be a public telecommunications company (this deal included a compensation package for ETI). [7] ETI reacted furiously and claimed that, by undertaking a review of its performance and attempting to negotiate the renationalisation of ENTEL, Bolivia had “destroyed” ETI’s investments and its earning potential, therefore making it cheaper for Bolivia to renationalise ENTEL. [8] A rather paradoxical statement considering ENTEL continues to operate at a profit and is continuing to advertise new products and services in Bolivia. [9] Instead of completing negotiations with Bolivia, ETI opted for a much safer bet, lodging a request for arbitration with the ICSID at the World Bank. 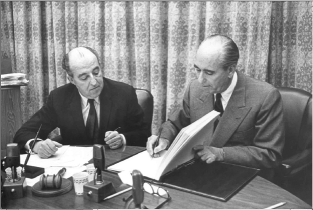 ICSID is known for being business-friendly, indeed, in 36% of the cases it has presided over, it has awarded in favour of corporations demanding compensation be paid (often the compensation package includes an allowance for ‘lost future profits’). Another 34% result in out of court settlements being paid. [10] In It is not possible for countries to lodge complaints against corporations at ICSID, regardless of how poorly a corporation has behaved within its borders. Seemingly profits are more important than the rights of people to determine how they think how their society should be organised. As Yves L. Fortier QC, ironically a chairman on a board at ICSID, succinctly puts it “Commercial arbitration exists for one purpose only: to serve the commercial man.” [11] ICSID effectively replaces national sovereignty with a corporate friendly, supranational justice system which is answerable to no higher court. Indeed, the influence of ICSID is much larger than the cases mentioned above; just the threat of arbitration is enough to chill a nation’s reform programme. [12]

On May 2, 2007, the government of Evo Morales, well aware of the unfairness of the ICSID officially denounced and gave notice that Bolivia was withdrawing from the ICSID convention of 1966 [13], the first country ever to do so. The ICSID convention, however, states that 6 month notice period applies to any withdrawal. ETI lodged its complaint with ICSID on October 12 and ICSID responded on October 29 (just a few days before the notice period was due to expire) stating it was willing to review the case, Bolivia then unsuccessfully appealed (there is some confusion, when other articles in the ICSID convention are taken into account, as to whether the notice period is or is not required). Unfortunately, because ICSID’s decision making processes are rather long winded, a decision will likely be made sometime between July 2009 and March 2010, and that’s just over the jurisdiction. [14] However, if Bolivia refuses, as it doing at the moment, to recognise ICSID then it could be tried in absentia and the case could progress extremely rapidly. [15] 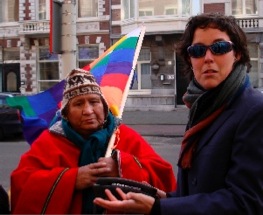 In response to ETI’s action 863 citizens groups from 59 countries sent a petition to World Bank President Robert Zoellick and 15 Dutch organisations made an appeal to the Dutch Government. In their appeal the NGOs asked the Dutch government to support Bolivia and investigate corporate abuse of the investment treaty the Netherlands has with Bolivia. The Ministry for Trade reacted predictably, washing its hands of any involvement in the case, saying “This concerns a dispute between a Dutch investor and Bolivia. The Dutch state is not a party in this and has no opinion about the merits of the case and the legal basis on which the company has submitted the dispute”. [16] What the Ministry doesn’t mention in its response is that the Netherlands receives a considerable income in the form of taxation on capital transfers flowing through letterbox companies and similar financial institutions. In 2006 gross transactions involving these entities amounted to €4.6 trillion, this is more than 9 times the Dutch GDP. [17] There is also a large tax and consultancy sector supporting these financial institutions and it is estimated that this sector employs 2,500 people and the Dutch government receives approximately €1.2 billion in tax revenue every year (plus €0.5 billion in office and management costs). Robert Zoelick, highlighting the undemocratic nature of ICSID and the World Bank, didn’t bother to respond to the concerns of the NGO community. The Italian telecoms giant, meanwhile, can be confident that the tribunal will rule in its favour, Robert Sills, counsel for ETI said, “[...] ETI is confident that the tribunal will determine that it in fact has jurisdiction and proceeed to decide the case.” [18] Given ICSID’s history of ruling in favour of corporations, this confidence is well warranted.

CEO spoke to Rocio Rocabado, a resident of La Paz, Bolivia’s administrative capital. Barely audible because of a crackling telephone line, she told CEO that she was happy with what Evo Morales has been doing, “He’s recovering the natural resources (gas) and strategic resources (water, electricity, telecommunications), he’s trying to provide universal health and education for everyone and I’m happy about his efforts to recover ENTEL.” CEO asked her what happened after ETI took over ENTEL in 1995, “Prices went up immediately. ENTEL failed in its investment commitments for rural areas and it’s also avoiding taxes”, “Even now, many people in rural areas still don’t have telephones, perhaps it’s just not profitable?”, she wondered.

Today, the European Union is aggressively pursuing a new generation of free trade agreements (FTAs), under the aegis of its ‘Global Europe’ project, including an FTA with the Andean Community of Nations, which includes Bolivia. The EU claims that this FTA, which includes further market opening and other privileges for EU service corporations, will bring more wealth and create new jobs. In the light of the Bolivia’s experiences with Telecom Italia and Bechtel, these promises sound very hollow indeed. 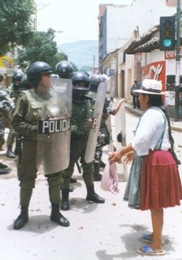 US multinational Bechtel was forced out of Bolivia in 2000 after its Bolivian subsidiary Aguas del Tunari raised water prices by more than 50%, sparking off three general strikes and angry street protests in Cochabamba, Bolivia’s third largest city. In an attempt to protect Bechtel’s contract the Bolivian government declared martial law and began arresting protest leaders in their homes in the middle of the night.

The company went to the International Center for the Settlement of Investment Disputes claiming $25 million in damages and $25 million in lost profits using the bilateral investment treaty Boliva has with the Netherlands. It, however, settled for a token amount in 2006.

Oscar Olivera, one of the protest leaders said, “Multinational corporations want to turn everything into a market. For indigenous people water is not a commodity, it is a common good. For Bolivia this retreat by Bechtel means that the rights of the people are undeniable.”

[1] Leubuscher,S., The Privatisation of Justice: International Arbitration and the Redefinition of the State, June 2003.

[12] Anderson,S., Grusky, S., Challenging Corporate Investor Rule: How the World Bank’s Investment Court, Free Trade Agreements, and Bilateral Investment Treaties have Unleashed a New Era of Corporate Power and What to Do About It, Food & Water Watch, Institute for Policy Studies, April 2007, p11: “Canada even repealed an environmental health regulation in the face of one threatened lawsuit by a U.S. corporation.”

[17] Interview with Michiel van Dijk of SOMO.nl, author of, The Netherlands: A Tax Haven?, SOMO, November 2006.

[20] There are many unknown cases, as some arbitration bodies keep cases secret.